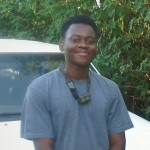 MRes Project: The effects of urbanisation on African bat community composition and diversity.

Lewis began his journey by studying Wildlife Biology at Manchester Metropolitan University. He graduated in 2016 and is now studying his Masters Degree. In September 2018 he started his MRes in Advanced Biological Sciences with a focus on Biodiversity, Ecology and Environmental Services at  the University of Southampton. His project will assess the effects of urbanisation on bat diversity and community composition in Malawi. 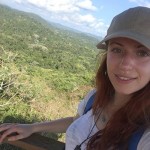 MRes Project: The Role of Gut Microbiota Community Composition in the Evolutionary Adaptation of Pipistrellus kuhlii to a Desert Environment

This MRes project aims to investigate the role of the gut microbiota community composition in rapid evolutionary adaptation of long-lived species to aridity. As a case study, I study the Kuhl’s pipistrelle bat, Pipistrellus kuhlii, a Mediterranean species that in the past 60 years expanded its range from the Mediterranean environment of north and central Israel to the arid, desert environment of southern Israel. The likely explanation for this is Desert Greening, as artificial water sources put into the desert for human agricultural use, provide this mesic bat species with drinking water and foraging sites. However, this does not explain fully how this bat is able to persist in the harsh desert environment.

3. Explore how these changes allowed the bats to persist in the desert environment.

Working in collaboration with local stakeholders (Southampton City Council, Southampton Common Forum and Hampshire Bat Group), the Bat Conservation Trust and Signify Philips Lighting, this MSc project will experimentally test the response of bats to different light spectra within the urban setting (Southampton Common, a large urban park), alongside an assessment of public perceptions. This MSc project will compare the effects of light with two different spectra on urban bats, the primary replacement lighting types installed across Europe, light emitting diodes (LEDs), which produce white light, and newly developed red lights (Philips Fortimo ClearField), which are promoted as an alternative to mitigate the impact of light on bats. The response of bats will be measured using acoustic monitoring to determine impacts on 1) overall bat activity, 2) overall bat species richness, and 3) the activity of light tolerant vs. light sensitive species. Public responses will be measured through questionnaires given to park users during the experiments.

Project: An Investigation into the impact of urban parks on bird species diversity and behaviour. 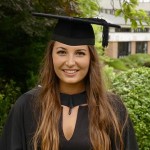 Project: Predicting the impact of climate change on the spatial distributions of bat species in arid and semi-arid environments. 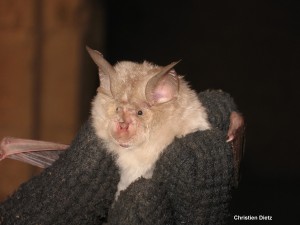 Project: Predicting the effect of interspecific competition on habitat suitability for the endangered African wild dog under future climate and land cover changes.

This study aims to identify the factors limiting the distribution of the endangered African wild dog, Lycaon pictus, and determine how biotic interactions and changing climate and land cover will affect future range suitability. Megan used Species Distribution Models to predict the current and future distribution of suitable conditions for African wild dogs and their dominant competitors, lions, Panthera leo. 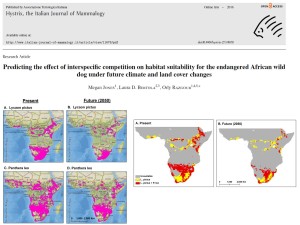