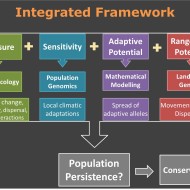 This project aims to establish and implement an integrated framework to understand and predict the responses of biodiversity to global environmental change. We combine

This project aims to establish and implement an integrated framework to understand and predict the responses of biodiversity to global environmental change. We combine genomic tools with ecological research, geographical data and modelling approaches to determine how climate change will interact with habitat loss and environmental heterogeneity to affect the future distribution, genetic composition and long-term persistence of species as a function of their adaptive potential. European forest bats are used as a model for mammals and birds that are at risk of extinction from range and habitat loss as a result of global changes.

Why bats?
What is an integrated framework?

We mathematically model the probability of the spread of adaptive alleles in populations taking into account migration between populations.

This project uses the landscape genetics/genomics approach to determine the range shift potential of populations that are predicted to be found in climatically unsuitable areas by the end of this century. We study the effects of environmental heterogeneity on the spatial distribution of both neutral and adaptive, ecologically-significant, genetic variation. And use this approach in a predictive manner to model the future spread of adaptive variation.

Different project components will be combined to model the probability of population persistence under future climate change and identify at risk populations and geographical areas.

Scientific findings will be translated into management recommendations for conserving forest bats under future climate change. This project will also contribute to promoting the inclusion of genetic and genomic data in conservation management and research. 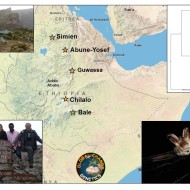 Landscape Genetics: the effect of environmental heterogeneity on movement ecology and range shifts

How does environmental heterogeneity affect the movement of organisms across the landscape and the spatial distribution of genetic variation?

Geographic and environmental features of the landscape, such as barriers and habitat discontinuity, can structure genetic variation at the individual and population levels via their effect on dispersal and gene flow. Landscape genetics offers an interdisciplinary approach for relating spatial genetic patterns to the effects of environmental heterogeneity on the movement of organisms.

Our work has shown the scale-dependent effect of the landscape on gene flow and population structure in bats. We found that across the range of the grey long-eared bat, Plecotus austriacus, connectivity is limited by broad-scale patterns of habitat suitability, while at finer spatial scales, land cover variables played a more important role. Connectivity in the fragmented UK population, at the northern edge of the grey long-eared bat range, was limited by distance to its main foraging habitat, unimproved grasslands (meadows).

Tropical highland ecosystems are highly sensitive to global change, especially in under-studied areas like Ethiopia that are threatened by extensive anthropogenic habitat loss and degradation. With our Ethiopian, Spanish and Portuguese collaborators we are studying how these sky islands and the intervening landscape matrix shape the genetic diversity and distribution of their unique fauna, focusing on the little known diversity of the Ethiopian Highlands’ Plecotus bat community.

Future climate change is predicted to result in major shifts in the distribution of species, and therefore identifying factors that facilitate movement and genetic connectivity among populations is a major challenge for conservation. We use landscape genetics as a predictive tool to assess how species will shift their ranges to track changes in climatic suitability and inform conservation measures that will facilitate movement. 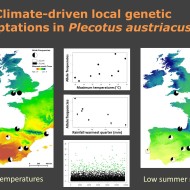 Understanding the genetic basis of environmental adaptations is essential for predicting biodiversity responses to global environmental changes. We combine population genomics and ecological approaches to

In a project funded by the University of Stirling Impact Fellowship we studied whether bats show genetic adaptations to climatic conditions associated with climate change.

We used a reduced genome representation approach (ddRAD-sequencing) to sequence parts of the genomes of individuals from ten populations of the grey long-eared bat, Plecotus austriacus, from across climatic gradients in the Iberian Peninsula and England, representing the northern and southern range limits.

We identified genomic regions associated with adaptations to both warmer and drier climatic conditions.

We used genomic and ecological data to model the spread of adaptive genetic variation under future climate change. 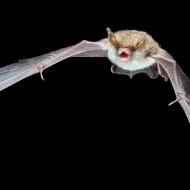 Combining genetic and environmental data with spatial modelling and inference of evolutionary history to show how past climatic changes shaped patterns of genetic variation.

Insights from the past into biodiversity responses to future climate change

Understanding how past climatic fluctuations during the Pleistocene affected the distribution of species and patterns of genetic variation across their ranges can help predict biodiversity responses to future changes. Our research combines genetic and environmental data with spatial modelling and inference of evolutionary history to show how past climatic changes shaped the current distribution of genetic variation in species with different distributions and ecological requirements.

Project 1: Shaping of genetic variation in edge of range populations under past and future climate change

We combined genetic analysis with ecological niche modelling across temporal scales and Approximate Bayesian Computation model-based inference of evolutionary history to research the effects of past and future climate change on edge of range populations of the grey long-eared bat, Plecotus austriacus.

We sequenced the full mitochondrial genome of a widely distributed Palearctic bat restricted to mountain ranges, the alpine long-eared bat, Plecotus macrobullaris. We integrated ecological niche modelling, approximate Bayesian computation (ABC), measures of genetic diversity and Bayesian phylogenetic methods to study the effect of differences in the extent of glaciation events on the demographic history of separate lineages.